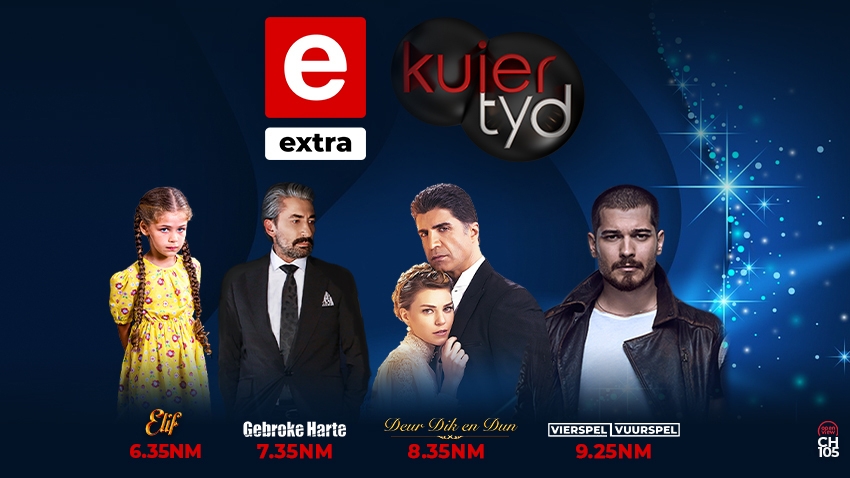 If you love a bit of drama in your life, then Kuiertyd is your destination of choice. Packed with award-winning telenovelas dubbed in Afrikaans, you can’t afford to miss all the drama, action and romance weekdays from 6:35PM on eExtra Openview Channel 105.

Here is what you can look forward to this September:

Elif is six years old when her mother Melek delivers her secretly to the wealthy Emiroglu household, where she will grow up, as her mother did, as a servant on the farm.  Although she doesn’t know it, Elif is the child of Kenan Emiroglu, the eldest son of the family.  He is not aware that the child is his, although he was in love with her mother Melek before she abandoned him.  But six years ago, Melek was driven from the farm, in fear of her daughter’s life.  Now, can Elif’s innate kindness and right the wrongs done to her and her family and bring happiness to Emiroglu Farm?

Gebroke Harte season 3 has no shortage of drama. There is tension in Dilara and Harun’s marriage, with is made worse by Harun’s jealousy of Chian. Chansu is currently recovering following a car accident with her husband’s father and Hazal is being framed for murder.

The Borans are among Turkey’s richest and most aristocratic families, holding court in a picturesque mansion among forests. Here, Süreyya will battle the tough family matriarch Esma Sultan, who has brought up her four sons alone. For her, protecting the family’s power is everything.

Love-struck Faruk, determined to carve out a life of his own choosing, proposes marriage to Süreyya, unaware of what his mother has in store for him. Esma has great dreams for her favourite son, and has set her heart on a different bride, one who is in her mind better suited to the family’s deep-rooted traditions.

When Sarp’s brother Umut disappears and is presumed dead, his mother hangs onto his memory for dear life. Sarp blames himself for having lost him and is still haunted by the loss. Just as Sarp is to graduate from the police academy he is assigned to infiltrate the mafia syndicate run by the mob boss, Celal Karabaş. He believes by succeeding with his mission he will finally find peace in his mind and soul.