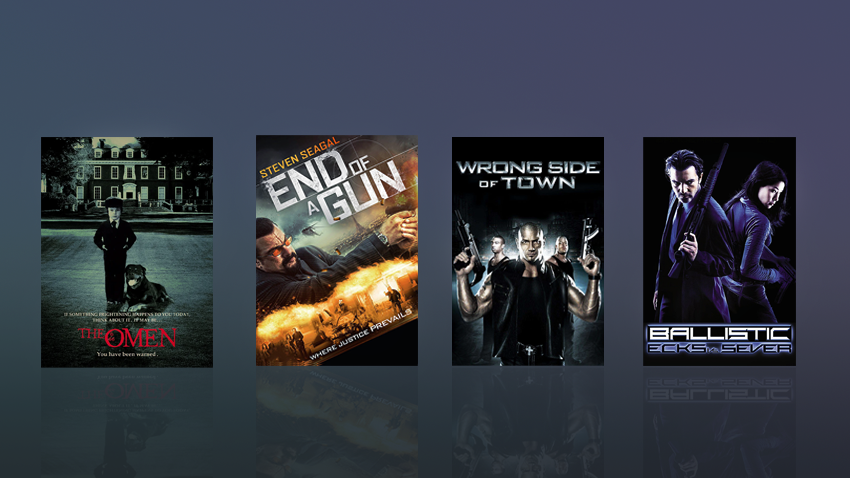 Thursday 1 July 9.40PM
Action, Adventure, Horror  A "National Geographic" film crew is taken hostage by an insane hunter, who forces them along on his quest to capture the world's largest - and deadliest - snake. Jon Voight, Jennifer Lopez, Ice Cube

Friday 2 July 8PM
Action, Adventure, Sci-Fi  The G.I. Joes are not only fighting their mortal enemy Cobra; they are forced to contend with threats from within the government that jeopardize their very existence. Dwayne Johnson, Channing Tatum, Adrianne Palicki

Saturday 3 July 6.15PM
Action Adventure Comedy A streetwise cop is enlisted to work with a veteran government agent on a team that monitors space aliens living on Earth, unbeknownst to the public. Tommy Lee Jones, Will Smith, Linda Fiorentino

Sunday 4 July 8PM
Comedy, Crime  Desperate to pay the bills and come through for their loved ones, three lifelong pals risk it all by embarking on a daring bid to knock off the very bank that absconded with their money. Morgan Freeman, Michael Caine, Alan Arkin

Monday 5 July 8PM
Action, Thriller  An NYPD officer tries to save his wife and several others taken hostage by German terrorists during a Christmas party at the Nakatomi Plaza in Los Angeles.  Bruce Willis, Alan Rickman, Bonnie Bedelia

Die Hard: With A Vengeance

Friday 9 July 8PM
Action, Thriller  John McClane travels to Russia to help out his seemingly wayward son, Jack, only to discover that Jack is a CIA operative working undercover, causing the father and son to team up against underworld forces. Bruce Willis, Jai Courtney, Sebastian Koch

Saturday 10 July 6.25PM
Action Adventure Comedy Four years after the alien-seeking agents Jay and Kay (Tommy Lee Jones and Will Smith) averted an intergalactic disaster, Kay has returned to the comforts of civilian life while Jay has taken over his former partner's role as the most annoyingly efficient employee of the unofficial government agency that regulates all things alien on Earth. While investigating a seemingly routine alien-on-alien crime, Jay uncovers a diabolical plot masterminded by Serleena (Lara Flynn Boyle), an evil monster disguised as a sexy lingerie model, and her two-headed, half-witted accomplice, Scrad/Charlie (Johnny Knoxville). When Serleena takes the entire MIB building hostage, Jay can only turn to the retired Kay, whose expertise represents the universe's last best hope to avert ultimate destruction.

Sunday 11 July 6.10PM
Action, Comedy, Romance A vacationing woman meets her ideal man, leading to a swift marriage. Back at home, however, their idyllic life is upset when they discover their neighbors could be assassins who have been contracted to kill the couple.. Katherine Heigl, Ashton Kutcher, Tom Selleck

Monday 12 July 8PM
Action Dan Barnes is a former pro boxer who retired after growing weary of his violent existence. Now a school janitor, Dan tries to help a new student, Matthew Miller, who is being targeted by bullies. While Matthew learns how to box and stand up to his tormentors, one of whom is the school boxing champ, Dan's new found role as a teacher helps him come to terms with his tumultuous past. Steve Austin, Daniel Magder

Tuesday 13 July 10.15PM
Horror When Kimberly has a violent premonition of a highway pileup she blocks the freeway, keeping a few others meant to die, safe...Or are they? The survivors mysteriously start dying and it's up to Kimberly to stop it before she's next.  A.J. Cook, Ali Larter, Tony Todd

Wednesday 14 July 8PM
Action Set in the world of illegal, underground fighting, a place filled with degenerates, criminals and lowlifes, DAMAGE is the story of John Brickner, a man recently paroled from prison after serving seven years for 2nd degree manslaughter. Remorseful of his crime, Brickner tries his best to re-start his life on the outside. Then he is approached by Veronika Reynolds, the widow of the man he killed. She tells him it was her letter to the parole board that enabled his release from prison. She explains to him that her daughter needs a heart transplant, but won’t survive long enough to qualify for a donor. She has no insurance and needs John to secure the $250K needed to buy a heart. Despite his unwillingness to fight, John is offered a chance to make big money in an underground fighting circuit.  Steve Austin, Walton Goggins

Thursday 15 July 8PM
Action, Crime An undercover Detroit cop navigates a dangerous neighborhood that's surrounded by a containment wall with the help of an ex-con in order to bring down a crime lord and his plot to devastate the entire city. Paul Walker, David Belle, RZA

Friday 16 July 5.50PM
Action Adventure Sci-Fi One of the most popular comic book superheroes of all time makes his leap to the big screen in Spider-Man, which already has wrapped up a collection of shattered box office records in its web. When student Peter Parker (Tobey Maguire) is bitten by a genetically altered spider, he gains superhuman strength and the ability to cling to any surface. Meanwhile, megalomaniacal businessman Norman Osborn (Willem Dafoe) is undergoing some changes of his own. An experimental formula has gone awry, increasing his intelligence and strength but also driving him insane. He is now the Green Goblin, Spider-Man's arch-enemy, who will put to the ultimate test young Peter Parker's vow to use his abilities to fight crime and help innocent people. Kirsten Dunst

Saturday 17 July 6.05PM
Action Adventure Comedy Agent Jay travels back in time to 1969, where he teams up with a younger version of Agent Kay to stop an evil alien from destroying the future. Will Smith, Tommy Lee Jones, Josh Brolin

What We Did On Our Holiday

Sunday 18 July 6.15PM
Comedy, Drama  A family of five is off to Granddad's big 75th birthday party at an uncle's estate in rural Scotland. The parents are separated and hope their three kids won't mention it. The kids love, can talk with, and will do anything for, Granddad.  Rosamund Pike, David Tennant, Billy Connolly

Tuesday 20 July 9.35PM
Horror  A student's premonition of a deadly rollercoaster ride saves her life and a lucky few, but not from Death itself, which seeks out those who escaped their fate. Mary Elizabeth Winstead, Ryan Merriman, Kris Lemche

The Exorcism Of Molly Hartley

Wednesday 21 July 9.35PM
Horror  Taking place years after The Haunting of Molly Hartley, who now, as an adult, has fallen under the possession of an evil spirit and must be exorcised by a fallen priest before the devil completely takes her.  Sarah Lind, Devon Sawa, Gina Holden

Thursday 22 July 8PM
Action, Thriller  Three strangers' lives are inevitably entangled in a conflict none of them are prepared for. Nicolas Cage, Anabelle Acosta, Enrico Colantoni

Friday 23 July 5.45PM
Action Adventure Sci-Fi The latest installment in the blockbuster Spider-Man movie series (based on the classic Marvel Comics hero) has the web-slinging superhero confronted by a formidable adversary named Dr. Otto Octavius (Alfred Molina), a scientist, better known as 'Doc Ock'; whose experiments go awry, mutating him into a metallic, octopus-like creature. Peter must also come to terms with his decision to dedicate his life to fighting crime as Spider-Man or give it all up to finally be with his true love, Mary Jane Watson (Kirsten Dunst), who he walked away from two years earlier. Tobey Maguire

Keeping Up With The Joneses